SURFACING 2 applicants at the HUSTISYA commemoration of human rights victims under the Arroyo administration held yesterday, September 17,2010 at the QMC ampitheater. The event was a great opportunity for the applicants and organizers as well as the potential "subjects" to get to know each other. It also offered the applicants a "glimpse" of the situation they will be immersing themselves in the next few weeks. 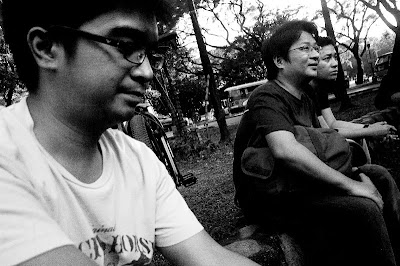 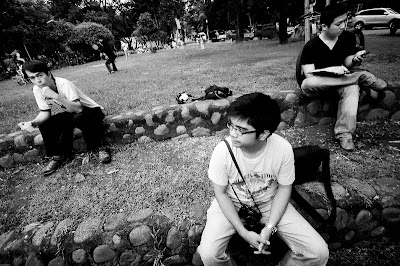 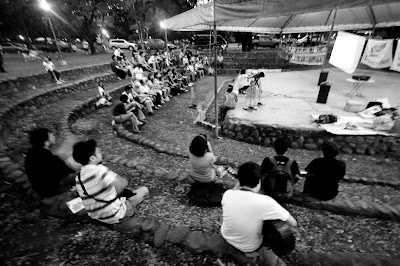 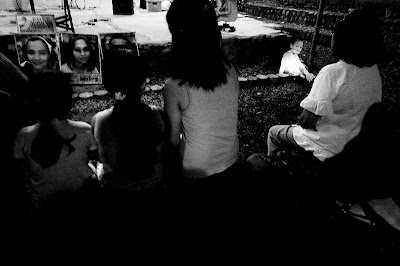 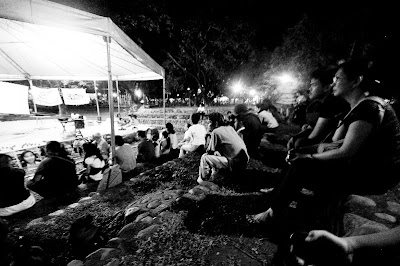 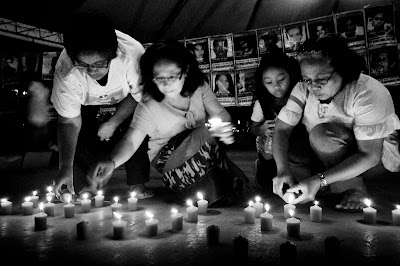 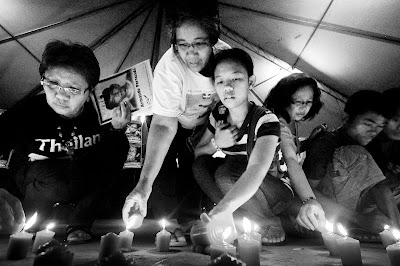 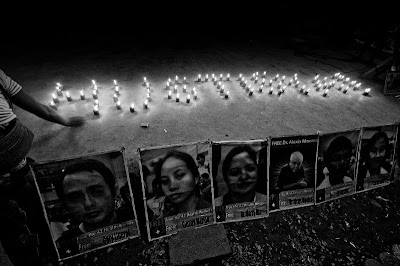 Posted by Surfacing at 11:44 PM No comments:

After a 2-year hibernation, the SURFACING project is back. SURFACING 2 is a photo-documentary project that aims to promote human rights through photography and creative storytelling. Initially focused on missing activists (desaparecidos), the second installment broadens the definition to include other forms of human rights abuse such as torture, political detention and killings.
The video was shot during a recent gathering of the SURFACING group and prospective participants and seasoned photojournalist friends to explore possible approaches for the documentary project.

SURFACING: Photography for Human Rights from projekt_desap on Vimeo.

Posted by Surfacing at 11:36 PM No comments: 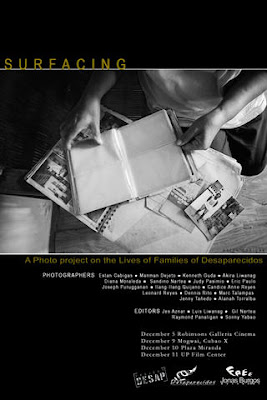 They were activists, wanting to change society by arousing and organizing amongst the masses. They were ordinary civilians, going about their daily lives. Suddenly, they disappear. Desaparecidos is the Spanish word meaning “the disappeared.” It was coined in Latin America where thousands became victims of enforced disappearance implemented by tyrannical regimes.

Enforced disappearance is “committed by government officials or by organized groups acting in behalf, or with the support, consent or acquiescence of the government,” according to the International Convention for the Protection of all Persons against Enforced Disappearance. It is among the most common human rights violations committed in the Philippines, often by suspected military agents in the name of counter-insurgency. Under the administration of President Gloria Macapagal-Arroyo, there have been 184 desaparecidos, the highest since martial law.

SURFACING, a photographers' initiative led by the Free Jonas Burgos Movement and Desaparecidos, is an effort to create and sustain public awareness on the issue of enforced disappearances. It shows the lives and struggles of 14 families of the disappeared, as well as that of the disappeared.

“A photograph is an expression of absence and a form of transport,” says writer John Berger. Let these photos express the pain and injustice of the desaparecidos’ absence and transport us to the reality that we need to face and collectively challenge.

SURFACING is a continuing project open to all photographers, amateur and professional alike, who are willing to join this human rights advocacy. For those who are interested to take part, please send a message via the contact form.

View photos at ProjektDesap Website.
Posted by Surfacing at 5:36 AM No comments:

SURFACING: A Photo - Essay on the Lives of the Families of Desaparecidos

A photograph is regarded as a powerful tool for communicating ideas in a way that a written or oral account cannot. A photograph is not hindered by language, nor does it expect its viewers to be educated or literate. The language that a photograph speaks can be understood by anybody.

It is with the acknowledgment of this power that we deemed it appropriate to use photographs as a tool for human rights advocacy. We intend to contribute to the continuing effort of sustaining and heightening public awareness and consciousness on the issue of enforced disappearances. By mounting a photo exhibit, we also intend to give a human face to the stories and struggles of the families of the disappeared (desaparecidos). We strongly believe that we can reach out to more people by telling their stories through images.

To ensure that we will indeed effectively convey these stories, SURFACING proposes to hold an output-based photo essay/story workshop which will be open to all amateur and professional photographers, both from the Philippines as well as the Asian Region.

This workshop intends to develop participating photographers' skills in creating compelling photo essays/stories while at the same time also creating awareness of human rights issues, in particular the increasing number of enforced disappearances in the country.

This initiative is part of a growing Artists Response against the human rights abuses of the Arroyo administration. Parallel efforts are currently being undertaken by independent and mainstream filmmakers, poets, artists and musicians. All these initiatives will culminate in a Human Rights Festival on Human Rights Day, December 10.

SURFACING, the photographers' initiative is headed by a small working group of student photographers with advice from professional photojournalists and in coordination with the Free Jonas Burgos Movement (FJBM). FJBM is a loose network of individuals seeking for the surfacing and release of Jonas Burgos, who was abducted last April, by suspected military operatives. It also speaks against human rights abuses, in particular, of other enforced disappearances of activists in the country.

A workshop to develop participating photographers' skills in making compelling photo essays/stories. The workshop will include an integration period wherein the photographers will be given a chance to interact with the families. While a second-hand account can be accurate and touching, we recognize that a first-hand account of a family's struggle is more powerful and compelling. It is for this reason that interested members of the families are also invited to join the workshop. We intend to develop their basic photography skills to enable them to make personal accounts of their day-to-day lives.

At the end of the integration, the participants will gather for a presentation and critiquing session. Veteran photojournalists Gil Nartea, Luis Liwanag, Jes Aznar, and Bogsi Panaligan will assist in the selection of photos for the exhibit.
Posted by Surfacing at 2:15 AM 2 comments: